I have been making a case for events in geo-historical information systems, periodically so to speak, over the past several years. Since I went “alternative-academic” (alt-ac) after completing my Geography PhD in 2010, I have neglected to publish material out of my dissertation—something I was cautioned strenuously against. I will begin rectifying that in bite-sized chunks on this blog; in time, maybe even write an article for an open access journal.

After nearly five years of building interactive scholarly works [1] others had in mind as a digital humanities research developer at Stanford, I’m moving on this Fall, and revisiting some of the things I was going on about in that dissertation. Oddly enough, I took a geography degree in order to better understand human history. Also odd perhaps is that I still like a lot of what I wrote.

It is titled “Representing Historical Knowledge in Geographic Information Systems,” and worth noting I was referring to (lower case, generic) geographic information systems, not GIS software packages like QGIS or ArcMap. Had no idea they were conflated so completely outside the discipline. Anyway, I began the introduction this way:

“The conceptual vehicle by means of which historians construct or analyze the contingency and temporal fatefulness of social life is the event. Historians see the flow of social life as being punctuated by significant happenings, by complexes of social action that somehow change the course of history.”

Complex historical events are dynamic geographic phenomena: they comprise human activity associated with particular locations on the earth surface, and their participants’ locations and attributes over time are integral to their analysis.

Events are the central and most comprehensive container for information about dynamic geo-historical phenomena. To describe an event well is to account for its purpose and results, its participants’ roles in component activities during some interval, its setting in terms of space-time locations and relevant condition states, and its relation to other events, including as elements of historical processes.

The representation of large numbers of events along those dimensions will enable a powerful “faceted browsing” capability, and spatiotemporal analyses supporting the discovery of underlying processes. The power of events as information containers will stem in large part from typing them along their numerous dimensions.

After four chapters explaining my ontology engineering methodology and analyzing print historical atlases to discover some of what I called “the stuff of history,” in Chapter 5 I finally got around to elaborating the case and citing the articulate originators of CIDOC-CRM:

If we make a simple graph of the things in atlas maps—say events, people, material objects, and settings—we see the only object directly connected to all the others is the event. Virtually all relationships between persons, things and places are a function of, or mediated by, events (Figure 5-1).

Doerr and Iorizzo (2008) describe how its (CIDOC-CRM) event-centered approach permits “a picture of history as a network of lifelines of persistent items meeting in events in space/time […],” an “extraordinarily powerful” model supporting a “surprising wealth of inferences” (p. 5-8). 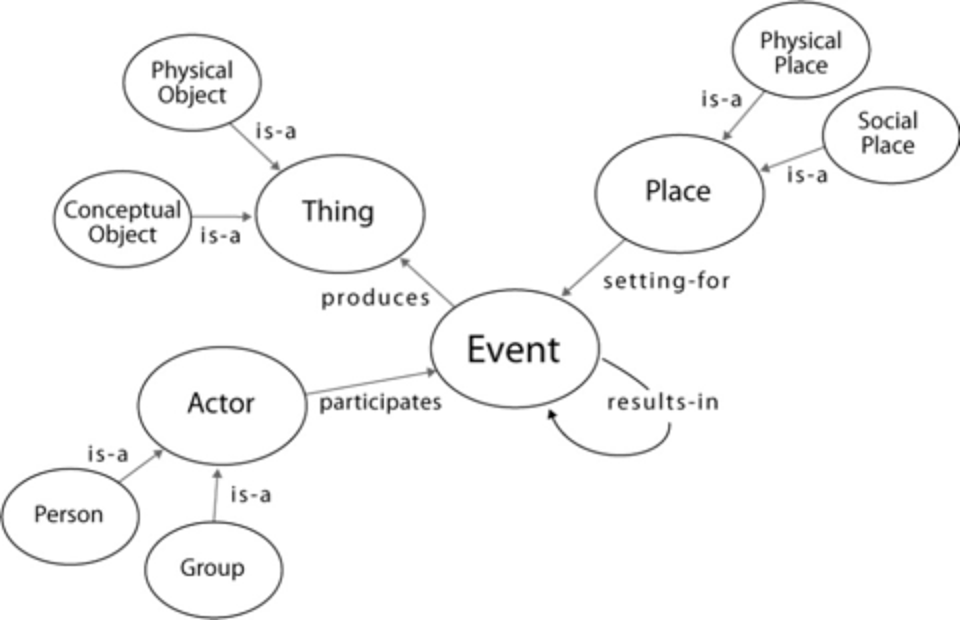 From that simple conceit, I went on to postulate that:

… just as physical objects are composed of one or more material substance, discrete temporal objects like events are composed of activity. At least it will be useful in the design of certain information systems to represent things as such, whether or not in actuality there is something in the temporal realm corresponding to matter in the physical realm. 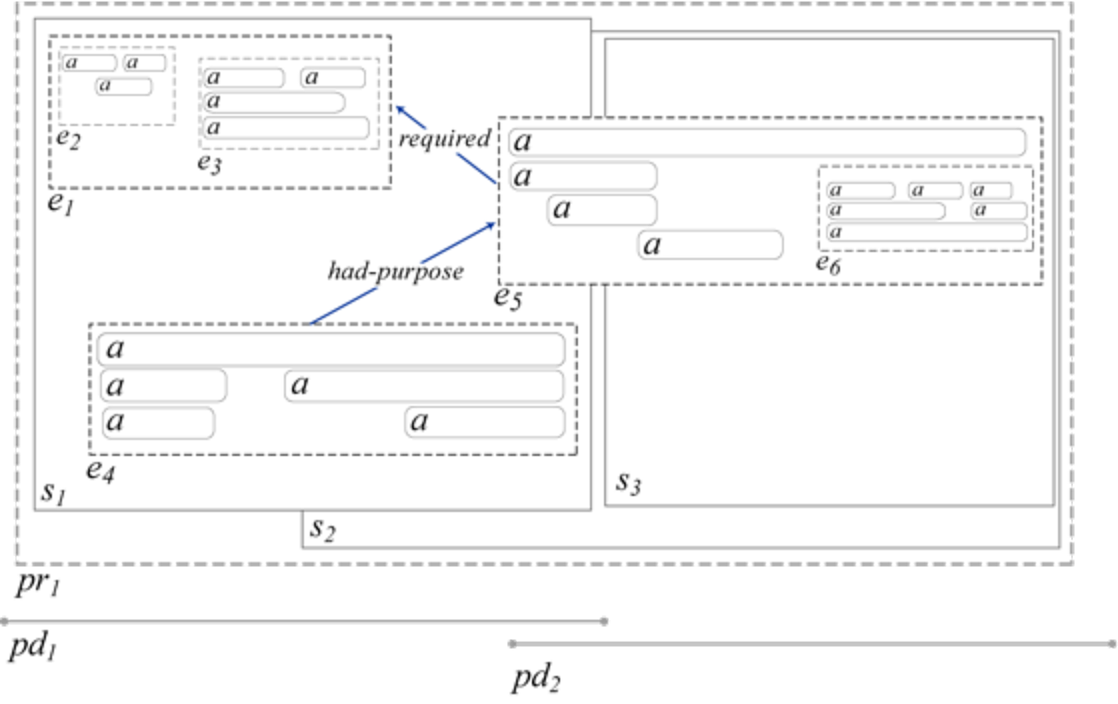 Following that (skipping a step or two), I framed the engineering tasks to follow by enumerating six primitive “constructs” (I prefer “patterns” now) that are key elements of historical knowledge representation: Events and Participation; Place; Groups and Membership; Historical Periods; Historical Processes; and Attribution.

Not coincidentally, I’m finding that the research I’ve pursued since has focused on a few of these, which are interwoven when one approaches particular systems, such as historical gazetteer services and applications blending maps and timelines.

In particular a new (to me) pattern, of Setting merges Place and Historical Period has emerged in response to requirements of particular systems and applications. My work on Topotime is a result. I do think this is the way ontology design patterns are supposed to work: as modular and often connecting pieces expressing conceptual and theoretical bases for data models and interchange formats.